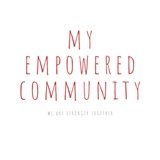 Cindi is a licensed social worker, a mom, a dog mom, a wife, a writer, an It Works Rep, an educator and a volunteer.  After many years of working with families to pick up the broken pieces of their lives, Cindi wanted to do something proactive.

So Cindi became an Empowerer.

Cindi is a soloprenuer who learned about self development. As she improved her confidence, she began challenging herself to do more and to be more. Ultimately, Cindi learned that soloprenuers NEED the support of others and she began to network.

After attending many different networking meetings, Cindi discovered that something was missing from those meetings and she refused to be pigeon holed into a specific industry or job category.  What Cindi craved was to learn more about the person BEHIND the job title they held.

So Cindi began her own networking community. Welcome to My Empowered Community where female soloprenuers lift one another up, refer to our own members, and ultimately learn from others who share our passions.

Our Partners make this site possible! Let's support them.